One of a kind: five unique proposal ideas to help you pop the question

Everyone’s relationship is unique, and it therefore follows that all proposals will, of course, also be unique. But that being said, there are definitely some proposal ideas that stand out from the crowd and will ensure your proposal story isn’t one people will forget in a hurry!

The key to creating a unique proposal is adding elements from your relationship that are distinctive to you two, as well as choosing a location that makes it very special. Here are some ideas to get you started on a proposal that will definitely get people talking…

Take to the skies for your proposal

It’s often said that love lifts us up, so why not embody this by proposing in a hot air balloon? Book yourself a flight for two and you can get down on one knee in the basket when you’re in the air – being proposed to in such a unique place is sure to make your partner feel on cloud nine!

As well as popping the question in the balloon itself, you could also position a banner spelling out your proposal on the ground beneath your flight path. You might need to enlist the help of friends and family for this one, so they can track your balloon and position your banner accordingly, but this could be a lovely way to get them involved and to have them with you for celebrating afterwards.

Just make sure that your loved one isn’t afraid of heights, and do remember that this kind of unique proposal is highly weather-dependent, so you might want to have a few dates up your sleeve to deal with any last-minute changes.

Shout your love from the rooftops when you propose!

Another way of taking your love to the highest heights is to create a unique proposal on a rooftop – and the good news is that there are loads of ways that you can craft a romantic rooftop proposal.

While there are some classic rooftop places for a proposal – the Empire State Building in New York, for example – you can make your rooftop proposal more unique by picking out somewhere less well-known. San Gimignano in Tuscany, Italy is known as ‘the town of the fine towers’ due to its skyline of medieval towers, and it was in this historic setting that Si Earl proposed to girlfriend Chloé, right at the top of the tallest one. “It was so gorgeous,” revealed Chloe. “Although he had to bribe me with wine to climb the tower in the first place, as we’d already been up two that day and I really didn’t want to climb another one!”

Rooftops over cities can also make for a wonderfully unique proposal setting. Tom Freeman picked the rooftop of a hotel in Havana, Cuba for his proposal to wife Ellie, which came as a huge surprise to her. “It was a lot more romantic than my initial idea of proposing over the washing up at home!”

Turn your proposal into a message in a bottle

A message in a bottle proposal is a fantastic idea for people who love mystery and intrigue – after all, who hasn’t thought about finding a bottle on the beach with a perfectly preserved note inside? This unique proposal will take a little bit of work on your part, and possibly some help from friends and family, as you’ll need to ensure the bottle is washed up at just the right moment, but all the hard work will be worth it as it’s a proposal straight out of a film or book!

A message in a bottle proposal can be a lovely part of a beach proposal, which we’ve got lots more ideas on here.

Get wet with a proposal in the rain

While many people want sunshine for their proposal, why not make yours unique by proposing in the rain? After all, it’s considered lucky if it rains on your wedding day, so you’re just adding a hint of that luck in advance. And to paraphrase Andie MacDowell in Four Weddings and a Funeral, your partner won’t notice the rain once they’ve got the ring on their finger!

Another great thing about a unique proposal in the rain is that if you’re getting professional proposal photos to mark the occasion, your photographer can get some stunning shots with such atmospheric weather.

A proposal that’s perfect for you, and you only

Sometimes there are proposals that will only work for your relationship, because they reflect an integral part of your story, or showcase an event that only you two have experienced. Using an experience like this is perfect for creating a unique proposal, as this story from Holly Lloyd shows. “Mark proposed to me at a festival one year to the day, in the same spot, at the same festival, where we had our first kiss,” she reveals. This is a fantastic way to make a proposal truly unique – taking a key moment from your relationship and then using it in your proposal. Simple, effective and oh-so romantic. 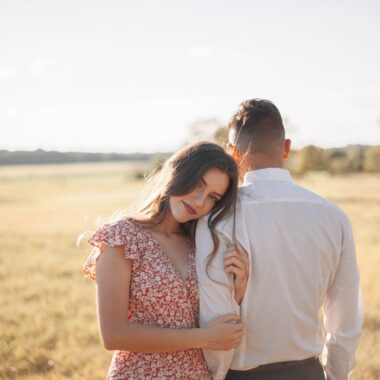 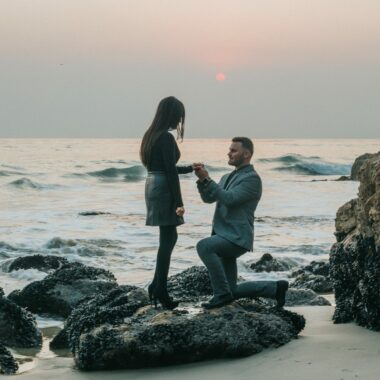 Eline Van Loock
Back to top